WEST HAVEN -- Alex Jamele grabbed two touchdown passes from Stephen Barmore and scored another on an interception return Saturday as fourth-ranked Southington marched into the Class LL championship with a 45-0 rout of No. 8 Ridgefield at Ken Strong Stadium.

Southington seeks its second state title next week against Fairfield Prep. The first came in 1998.

"It's an awesome feeling," Southington coach Mike Drury said. "It's what your work for year round. The kids deserve this. They did a great job."

Jamele, who broke the state record for touchdown receptions in a season (26), caught TD passes of 22 and 29 yards. His 40-yard pick-6 came early in the second quarter to give the Blue Knights (11-1) a two-touchdown lead.

"Everyone does their job. When it's a team effort, you really can't stop our offense or defense," Jamele said. "It's a great feeling. I want to celebrate with my teammates. I'm excited and focused for the next game."

Southington's first drive stalled on the Ridgefield 9 and Kyle Smick's field-goal attempt into the wind went wide left, but the rest of the half belonged to the Blue Knights (11-1).

On the next possession, the Knights drove 83 yards in nine plays with Barmore hitting Jamele from 22 yards out.

A 56-yard punt by Smick early in the second quarter pinned the Tigers (10-3) inside their own 10. On third-and-14 with Ryan Dunn throwing into the wind, Jamele picked off a pass like a center fielder camping under a fly ball and raced 40 yards for a 14-0 lead.

A penalty on the ensuing kickoff forced Ridgefield to start from its own 6. Southington linebacker Matt Thomson pounced on a fumble on the next play. The Tigers defense stiffened and Smick booted a 22-yard field goal.

A 43-yard run by Will Bonaparte keyed Ridgefield's next possession but linebacker Steve Hamel stuck receiver Stephen Alt for no gain on a fourth-down play.

Tyler Hyde ripped off a 50-yard run with Robert Peckham making a touchdown-saving tackle at the Ridgefield 24. Two plays later, Barmore hit tight end Jay Rose inside the 10 and he broke a tackle before stumbling into the end zone for a 31-0 halftime lead.

"It's a bad day to have a bad day against a really good team," Ridgefield coach Kevin Callahan said. "They jumped on us early and stayed on us often."

An interception by Hyde set up his one-yard plunge early in the third quarter. He added a second touchdown with a minute left in the quarter to close out the Southington scoring. 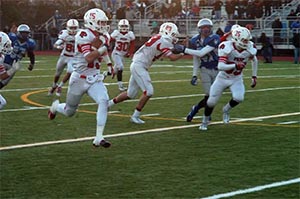 TRUMBULL - Colton Smith piled up significant yards rushing the ball but perhaps the most important carry he had in Saturday's Class LL state playoff semifinal round game was a 13-yard loss for safety - a designed play that enabled the Jesuits to run the final seconds off the scoreboard clock to capture a thrilling 29-28 win over West Haven.

The seventh-seeded Jesuits, who needed a Thanksgiving Day win over West Haven to qualify for the state playoffs, earned their second win in a little more than a week over the Blue Devils (the Class LL's No. 6 seed) to advance to face Southington in the championship tilt.

Prep's Brendan Beiser intercepted a pass at his team's eight yard line with only 1:06 remaining to thwart West Haven's potential go-ahead drive, and help the Jesuits maintain a 29-26 edge. After the Jesuits ran off a few plays and the BlueDevils burned their remaining timeouts, Prep let the clock run down to five seconds remaining then put the game on ice by sacrificing two points to avoid a possible blocked punt.

"That's a tall order," Prep Coach Tom Shea said of his team beating West Haven twice in a short span. "And I'm so proud of the kids.

The Jesuits had to overcome a West Haven lead to pull off the Turkey Day win, and this time managed to go punch for punch in a back and forth battle between the rivals.

"It was a great game. We knew it would be. We envisioned the game just like that," said West Haven Coach Ed McCarthy. "They made one more play than we did."

McCarthy said he thought the Jesuits would go on to win the title. He also credited his players for putting forth a strong effort. "I'm incredibly proud of the whole team," he said. 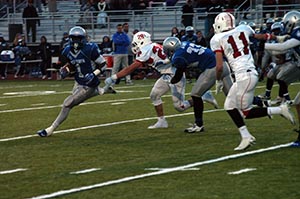 The see-saw game was scoreless after one quarter of play. The defensive opening 12 minutes was highlighted by an interception by West Haven's Ervin Philips.

The Blue Devils got on the scoreboard first when quarterback Duane Gary connected with Zatrell Lyons for a 29-yard scoring strike on fourth down and 17 yards to go with 9:18 left in the second quarter. Prep got on the board on a safety two plays after punter Stephan Walsh pinned the Devils back at their two yard line. Prep's Anthony Johnson made a tackle in the end zone to make it a 7-2 game with 4:35 to play in the opening half.

Prep cashed in following the ensuing kick, when Smith found his way into the end zone from nine yards out. Henry Healy's point after kick made it 9-7 Jesuits with just 1:06 to go before th e break. Although things didn't break West Haven's way in the final 1:06 of the game, the Blue Devils did take advantage of the final 66 seconds before halftime. Gary broke loose for a 65-yard TD scamper with just 17 seconds left in the second. The two-point conversion failed and West Haven held a 13-9 lead heading into the third.

The Blue Devils added to their lead on Philips' 65-yard score - a play in which he started up the right sideline before cutting back across the field to get to paydirt. It was 19-9 less than a minute into the second half.

Prep's defense held strong on consecutive series, forcing back to back West Haven punts, the first of which was returned 65 yards for a go-ahead score by John DelliSanti. The kick attempt failed but Prep led 22-19 with 2:35 left in the third.

In the fourth, the Blue Devils reclaimed the lead on Marshont Little's three-yard run into the paint. Tayvon Gibbs tacked on the point after for a 26-22 lead with 7:56 left. The score was set up by a trick play in which Philips took a handoff and completed a 36-yard pass to a leaping Zatrell Lyons to the three yard line.

Prep converted a fourth down on its next drive, one led by the ball carrying of Smith and Crowle, and Crowle scored the decisive points when he broke a tackle and rumbled 33 yards then dove over the goal line with 3:53 left.

"That's a great team," Shea said of his counterparts. "They've got play-makers. They've got the winningest coach in the state of Connecticut."

Smith was optimistic about his team's chances in the pinnacle game. "I think we have a very good shot. We just have to practice hard, watch film, and we've got to want it," he said. "We've got to want it - that's the biggest thing."